Remote code execution vulnerability exists in Microsoft Office software and is caused when the Office improperly handles objects in memory while parsing specially crafted Office files. This could corrupt system memory in such a way as to allow an attacker to execute arbitrary code CVE-2015-0097 .
To exploit this vulnerability the user has to be tricked into visiting the attacker's website by clicking on a link. Another scenario could be downloading and opening specially crafted MS office email attachment. Microsoft Word, Excel and Powerpoint contains a remote code execution vulnerability because it is possible to reference documents such as Works document (.wps) as HTML. It will process HTML and script code in the context of the local machine zone of Internet Explorer which leads to arbitrary code execution.

Once the user opens the office document the attacker is able to perform actions in security context of the logged in user.

When the user opens that crafted document the code is executed. The code connects to attacker's server and downloads a file which is saved as .hta in the \appdata\roaming\microsoft\windows\start menu\programs\startup\ directory.

So when the user reboots the machine this malicious file which is saved in the startup directory is executed. This allows remote attacker to execute arbitrary code via crafted office document aka "Microsoft Word Local Zone Remote Code Execution Vulnerability."

That's why you might need to check whether your Security Devices are updated in Signature to protect this kind of vulnerability. 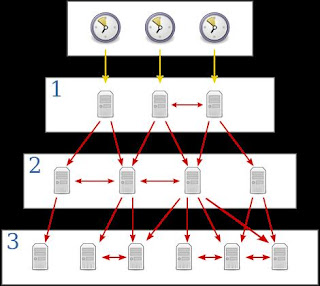 in Knowledgebase, Networking - on 10:29 PM - 1 comment
If you want to disable the Wireless SSID from broadcasting and remove on all Access Points, please follow below steps in your Ruckus ZoneDirector.
- Login to ZoneDirector
- Click "Configure" and go to "WLANs"
- Fine "WLAN Groups" under "WLANs" Section
- If you are using "System Default Group", just select it and edit. Then uncheck the SSID which you want to disable from bradcast and remove from all APs and Click "OK".
- If you are using "Custom Group", just same as above step.

Now your SSID has been disabled and removed from all Access Points.
You can verify by going to Dashboard and checking "Most Recent System Activities".

Have a good time.
(Be knowledgeable, pass it on then)

in Knowledgebase, Networking - on 7:48 PM - No comments
I had to configure and install one Meg@POP router at site office.
Configuration is very simple. Just WAN, LAN and Static Routing.
After all configuration was done, I can PING from router and client to SingTel Side IP and HQ side IP but not from them.
I had to reviewed simple configuration repeatedly and unable to find any wrong.
But after check the Firewall setting since this router has security feature included.
Then realized "Block WAN Request" option checkbox was checked and need to uncheck.
After I unchecked it and save, SingTel and HQ can PING to this router successfully.

So if you are having same issue like me while configuring Cisco RV215W Wireless VPN Router, just do no forget to uncheck that "Block WAN Request" and save to able to PING from outside.

Have a good time.
(Be knowledgeable, pass it on then)